Spooky World first opened its doors in Berlin, Massachusetts back in 1991. The original horror scream park featured haunted houses, sideshow attractions, celebrities and a notorious haunted hayride. The park was soon after deemed New England's largest and most terrifying horror scream park, becoming a household name. Seven years later, Spooky World moved its location to Gillette Stadium in Foxboro, Massachusetts to partner with the Kraft family. With the growth and development of One Patriot Place back in 2005, Spooky World found itself looking for a new home. Displaced for a couple of years, Spooky World bounced around from Boston Bayside Expo Center (Boston, MA) and Canobie Lake Park (Salem, NH). In the Fall of 2009, Spooky World joined forces with the horror scream park powerhouse, Nightmare New England, to create America's number one haunted destination in the Northeast. It’s now permanently headquartered in Litchfield, NH at the property of the famous Mel’s Funway Park. Throughout the years Spooky World has continued to grow and win awards thanks to a creative team that is always looking for a new way to deliver a fright. And they are no stranger to publicity, hosting events like a truly unique real horror-glam wedding. In 2015, Spooky World took on one of its most ambitious projects by creating a mile-long Haunted Hayride - unlike any other in the region.

In 2021, the Spooky World owners and creative team worked together to dream up and develop a haunt with the latest in fright technologies - Asylum 47. A new theme in Spooky World’s collection of attractions, this haunt is set in the year 1947 on New Year’s Eve. With terrifying scenes and secrets around every corner, Asylum 47’s actors and real-as-anything animatronic patients are eager to start their new year - and poised to disturb.

Run by owners Mike Accomando and Wayne Caulfield, Spooky World reigns as one of America’s favorite horror scream parks; one that continues to bring fright and delight with new additions and expansions to both Spooky World and Mel's Funway Park year after year.

People from around the country continue to travel to New Hampshire for the biggest, the original… Spooky World presents Nightmare New England 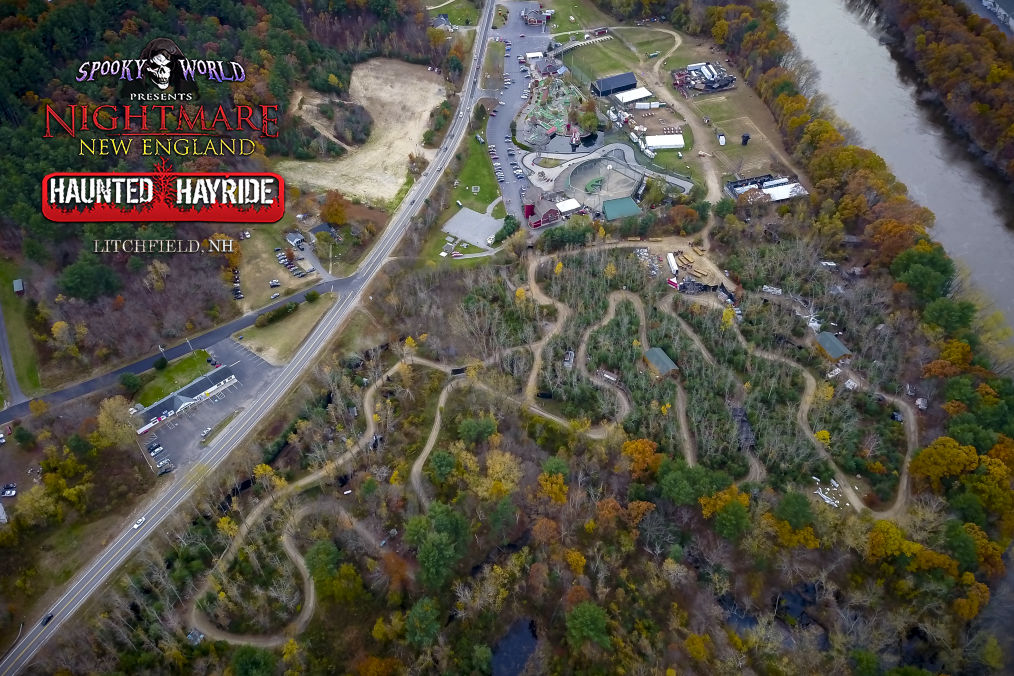 Horror Fanatics from New Hampshire, Massachusetts, New England and across the country travel to visit us every year for thrills, chills, screams & fun!

Get a full night of fear and fun for one low ticket price!

Our Spookiest Season Yet

TThe management and staff of Spooky World & Mel’s Funway Park will follow all state of New Hampshire guidelines for the 2022 Spooky World Season. Although facemasks are not required, they are recommended. Please check back as we will update any changes required by the State.

Be the first to know about promotions, special events, and the latest park information!